Complete the following sentence: “Christmas wouldn’t be Christmas without…”

The chances are, your ending to that sentence will depend on where in the world you are reading this from. It is a time of year that is so dominated by tradition, it’s easy to forget that other people’s traditions aren’t the same as your own (and even easier to argue over whose are best). I wanted to find out more about some of these different traditions, and fortunately, working at ASC means I’m in the right place to find out, as a global organization (certified farms on every continent except Antarctica) with a very global workforce (including representatives from about 20 countries).

One thing that a lot of countries have in common is a love for eating seafood at Christmas, so we thought we’d take a brief tour of some of the different seafood traditions around the world at this time of year. I had so much feedback that we’ve had to split it into two blogs (keep an eye out for part two) but this is still far from a definitive list and I have obviously had to miss out a lot of countries – if you have a favourite seafood tradition where you live that we’ve not included, we’d love to know about it – you can share it with us on Twitter or Facebook. And who knows, you might even be inspired to import one of these traditions and make it your own next year! There are a few links to different recipes you might like to try, and for an even bigger selection you can visit the ASC recipe page.

The main Christmas meal in France is known as réveillon – that comes from the word for waking, and it is appropriate as the meal (more of a feast) is traditionally held on Christmas eve after Midnight Mass (this is a little unfair to Santa, as it gives him an even smaller window of time in which to deliver presents while people are sleeping). The same name is given to New Year’s Eve celebrations.

I hoped my French colleagues would have plenty of delicious examples of Christmas seafood and I certainly wasn’t disappointed. Science and Sustainability Communication Manager Bertrand Charron and Commercial Marketing Manager for France and Belgium Camille Civel are both based in France. They both agreed that scallops, oysters, salmon and shrimp are all very popular at Christmas.

So what can you expect at a typical réveillon?

The meal will often start in style with huîtres (oysters) – these are popular throughout France. Traditionally served very simply, on ice and with lemon, to appreciate the full flavour of the oysters. What drink goes well with oysters, I hear you ask? Well, I’m reliably informed that you can’t go wrong with a nice dry white wine, or even better, champagne – it is Christmas after all.

Other aperitifs include caviar. Purists believe the best way to enjoy this is on its own (but not from a metal spoon which can affect the taste), though many will serve it on blinis. Keep the champagne flowing because it goes well with caviar as well – as does ice-cold vodka! If you don’t want to stretch to caviar, trout or salmon roe can be a popular replacement, or even simply smoked salmon on blinis instead. 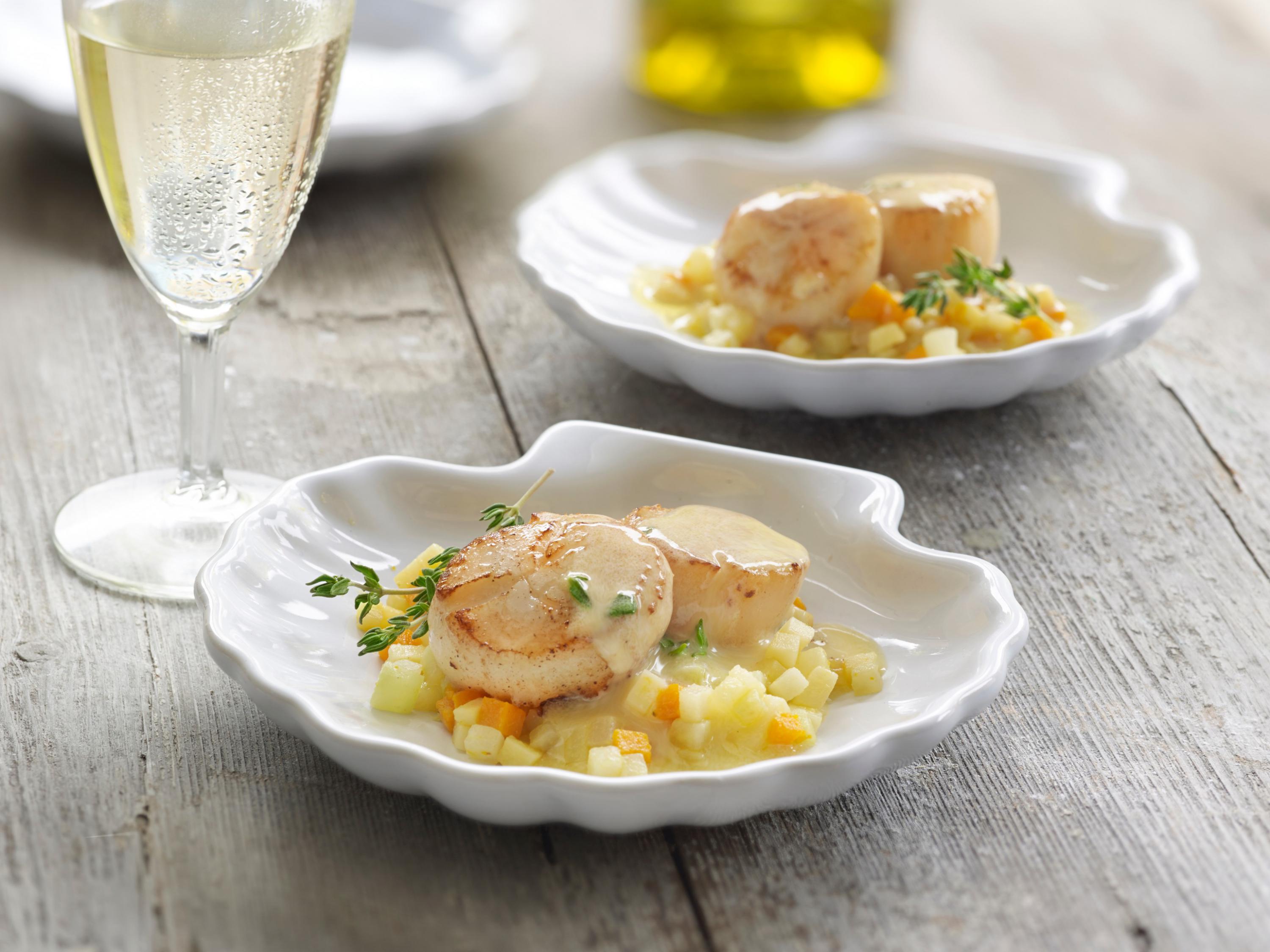 Another traditional favourite is Coquilles Saint Jacques, or scallops. These are enjoyed in many different ways, often in a creamy sauce as a starter (that’s right – we’re still only on the starters so I hope you left plenty of room!) If you want to add wine to the sauce, we recommend Monbazillac, Sauternes or Chardonnay. Feeling inspired? Here’s a scallop recipe you can try

The rest of the meal can involve all manner of foods, including lobster, langoustines, and poultry stuffed with chestnuts – though some prefer a lighter option such as a salmon – if you’d like to try something similar, we have a delicious recipe for salmon papillote. In some regions dessert can consist of 13 components, representing Christ and his 12 disciples (I told you to leave room!) Many of those components will be simple fruit and nuts, however. A dessert staple around the country is a festive yule log – a rolled sponge cake.

I’m writing this in the UK, which means two things: I am obsessed with weather, and I can’t imagine Christmas not being cold. So I’ve always been curious about what people do in countries where Christmas is a summer event.

According to Duncan Leadbitter, ASC Commercial Outreach Manager for Australia, seafood – and especially prawns – are a big part of Christmas in Australia.

Given the heat, prawns are often eaten cold, whether that’s as part of a classic prawn cocktail (enjoying a bit of a comeback) or a chilled seafood salad. Oysters are another great option for eating chilled, of course, and many Australians do just that. And for many Australians it wouldn’t be Christmas without a barbecue – and what better fish to enjoy on the barbecue than the prawn? If you’re looking for a great barbecue idea (or the grill in your oven for those of us not enjoying a summer Christmas) we’ve got just the thing on our recipe page – prawn and vegetable skewers. Washed down with a couple of cold beers…maybe I could get used to a summer Christmas after all.

That’s it for the first half of our whistle-stop tour around the world’s Christmases. Click here to read part two, where we’ll be visiting Ecuador, Spain, Italy and America – apologies in advance for the jetlag.