Koji has marine biology degree from Bangor University and aquaculture master degree from James Cook University. Prior to joining the ASC, he had worked as an aquaculture officer for FAO and the Network of Aquaculture Centres in Asia-Pacific (NACA) to implement sustainable aquaculture development projects. He also took a part in developing FAO “Technical guidelines on aquaculture certification”, which was published in 2011. Since 2017, he has been working as a general manager of ASC Japan to promote environmentally sustainable and socially responsible aquaculture in Japan. 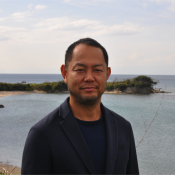